Given widespread public dissatisfaction with the government’s handling of the current coronavirus outbreak, Prime Minister Naftali Bennett appealed for patience Sunday evening, saying he was aware of the frustration over the frequently changing testing and quarantine rules, and lack of compensation to businesses.

The government is reportedly weighing reversing the new controversial policy to limit PCR tests to risk groups while having the general public take less-accurate antigen tests.

Meanwhile, Finance Minister Avigdor Liberman dismissed complaints from business owners who reported a steep decrease in income, claiming that “all businesses are in excellent shape” and that the government would not be handing “gifts” in the form of payouts, which he deemed “election bribes.”

Under new testing regulations, those who are over 60 or at high risk are prioritized at PCR testing stations. Those who are under 60 and fully vaccinated are encouraged to conduct a rapid antigen test, either at home or at a testing station, and can use those results to get exemptions from quarantine if they are exposed to a confirmed coronavirus carrier.

The new rules came amid a huge surge in infections driven by the highly contagious Omicron, which strained PCR testing centers to the limit, as more and more people came to get tested after coming into contact with carriers or experiencing symptoms.

But since the rule change, Israelis have been swamping antigen testing facilities and drugstores to purchase home antigen tests — regarded as far less accurate than PCR tests, particularly when it comes to detecting the Omicron strain — with Health Ministry hotlines collapsing amid the mass confusion over the new rules. Some Israelis have also reportedly been refusing to take home antigen tests and “voluntarily” putting themselves in quarantine.

Much of the confusion has been related to quarantine and testing rules at schools, public feuding between the health and education ministries and conflicting statements on tests at schools, and the new quarantine rules.

Bennett said Sunday that the government would supply free home antigen tests to students and teaching staff, and the health and education ministries said in a joint statement that the distribution would begin on Monday. Elementary schools will be the first to get them, followed by middle schools and high schools. 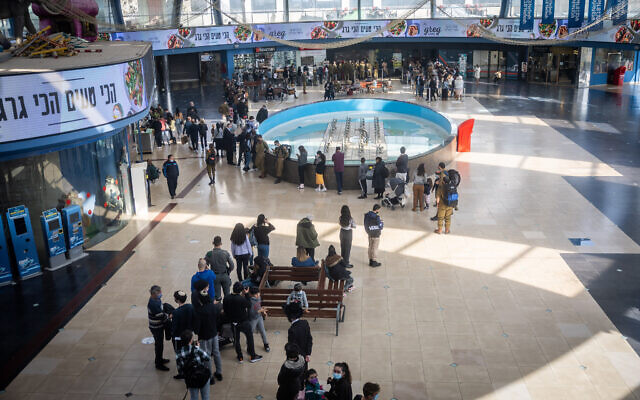 People line up in a queue at the entrance to a COVID-19 rapid antigen Magen David Adom testing center in Jerusalem’s Cinema City on January 9, 2022. (Yonatan Sindel/ Flash90)

The Health Ministry announced that more businesses would be permitted to sell the tests in the hope that this would increase availability and lower prices. Officials have been debating placing price caps on at-home tests to clamp down on price gouging, as demand outstrips supply and due to concerns that a shift to at-home testing would put strain on Israelis unable to afford the rapid tests.

Live news: US and UK to begin talks aimed at reaching deal on metals tariffs –

Downing Street party: Who is Martin Reynolds and what did he do?